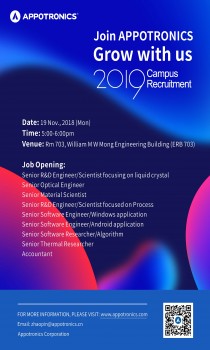 Registration will be closed at 11:00, 19 Nov 2018. Those who are not registered may try to walk in on a first-come, first-served basis.

Appotronics Corporation, founded in 2006. With its vigorous pursuit of innovation and disruptive technologies, the company has invented the ALPD® laser phosphor display technology in 2007. In the 10 years hereafter, Appotronics has continuously improved the ALPD® technology and has established its realm of intellectual property with more than 1000 patents worldwide. The ALPD technology is a major breakthrough over the limitations of light sources like LED. It has also overcome the technology bottleneck of traditional RGB laser including cost, efficiency and reliability. It is the first industrialized laser display technology in the world.

Based on its world-leading ALPD® technology, Appotronics has developed a series of products which have had profound influence over the display industry. In 2013, the world’s first 100 inch laser TV developed by the company has won the CES ‘Product of the Future’ prize. In 2014, the world’s first 20,000lm DCI certified laser cinema projector has been used in the premiere of the film ‘Transformers: Age of Extinction’. Appotronics has been trying to apply its idea of innovation into more and more applications in the display industry through its world-leading ALPD® technology.

At Appotronics we believe that technologies can change people’s life. And we are trying to achieve our ambition to bring to new way of life to people with our passion of and spirit in innovation.